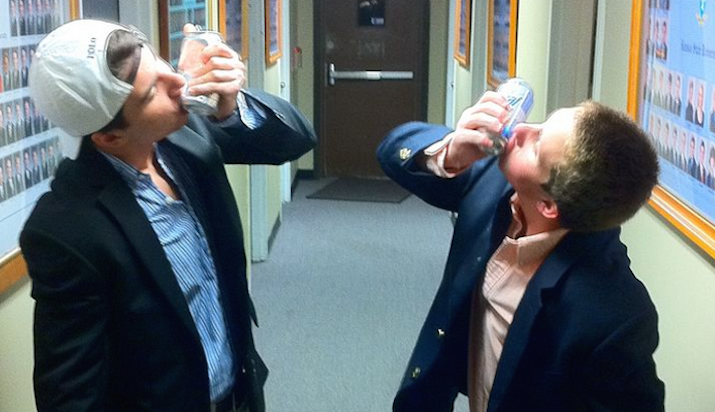 Across the nation, rush is beginning to heat up. If it’s not already in full swing, it’s rapidly accelerating into a full-time job for those in charge of it. With that said, I realize there are many of you who love this site and think fraternity life may be for you, but are not yet convinced enough to pull the trigger and sign up for rush. For those of you with an embarrassingly short attention span who cannot focus long enough to read this column, the answer is: sign up right now. If you would like to hear the reasons why you should sign up for rush, please continue reading.

I have never alluded to my pre-writing life on here, but I have one very NF confession: I hated fraternities and I nearly didn’t rush.

It’s true. I did hate fraternities. In fact, as much as I loved this website my senior year of high school, it presented a perspective of fraternities that almost steered me clear of Greek life. Sure, we always say it’s “satire,” and that’s the truth–it IS satire. However, as an impressionable high school youth with no family ties to fraternities or sororities, I was slowly led to believe something that was not true. I saw fraternities as cesspools of debauchery and immorality. Although I was an athletic and intelligent high school student, I felt as though that crowd may not be for me.

I specifically remember one of my best friends discussing fraternities with me as I ran around the track during practice one afternoon, just weeks before graduation. He jokingly said, “I can’t wait to join [fraternity redacted], I hear they do a lot of cocaine. That’s so badass.” I laughed with him, but inside, it only further developed my misconceptions.

Fellow students asked me repeatedly, “Why aren’t you rushing?” I never really had an answer other than, “I just don’t think that life is for me.”

Fast-forward several months into the summer. I found myself on the shores of Florida, enjoying a beach trip with friends. One of the guys on the trip with me, one of my best friends, had just completed his freshman year at the university I was set to attend (shout out to you, JJ). He had gone Greek and was determined to change my views and sign me up for fall rush. After several days of nonstop discussion, I broke down and sent in my information to the Department of Greek Affairs. I, one of the most anti-Greek people I knew, was taking the plunge.

It quickly became one of the best decisions I had ever made.

The fear of the unknown that had kept me at a distance quickly disappeared as I realized that fraternities are not breeding grounds of rape, the objectification of women, and overt drug and alcohol use, but rather unique, miniature communities of college-aged males who enjoy being with one another and like the infinite perks that come with being initiated into a fraternity.

Fraternity brothers become your family away from home. They become your confidants when things get rough, yet they’re also the ones who will kick you back into gear when you need to be set straight.

Think of the number of fraternity chapters throughout the country. I haven’t done the math, but I would imagine there are thousands of chapters. Now, recall the number of fraternities that are featured on this very site for their despicable actions or downright stupidity. In the grand scheme of things, that number is nearly irrelevant.

The fact of the matter is that any large group of men in their late teens and early twenties are going to find themselves in trouble at some point. The odds are against them. The law does not discriminate between Greeks and those who are unaffiliated. However, a news headline featuring an outrageous, illegal action with fraternity letters plastered next to it draws ratings.

Rape, sexual assault, drug use, and other illegal, reprehensible activities occur in our society all day, every day. Pick up your local paper and count the number of everyday citizens arrested for those crimes. They outnumber the Greek affiliated college students arrested for the same crimes by far. My point is, for those of you who think that joining a fraternity condemns you to four years of immoral and criminal activities, you are incorrect. In fact, if you decide to rush, you will be pleasantly surprised at what you find.

Many of you may not be worried so much about the overblown reports of rampant drug use and other issues that are often associated with Greeks, but rather you are unsure if you will fit in, or if you’ll be ostracized for not being of a certain race or for wearing a certain brand. Let me tell you, that couldn’t be further from the truth.

If you are reading this, you’ve most likely read Fail Friday at some point. Check out one of the most recent editions and count the number of kids wearing letters. Yes, those kids received bids and were initiated into fraternities. If they found a home, there is absolutely no reason you can’t as well.

I believed that I would not find a home, that I would be the outcast of my pledge class. That wasn’t the case at all. You will meet fellow pledge brothers for the first time and tell yourself, “There’s no way I will ever like this kid.” Sure enough, by the end of the semester, that kid is your best friend. Things have a funny way of working out, and it always, without a doubt, works out.

By the end of my freshman year, I had gone from one of the most anti-fraternity graduates at my high school to one of the highest ranked pledges of my class. I fell in love with it instantly, and it is something that I now know I would have forever regretted had I not taken the leap of faith and rushed.

While I do understand that fraternity life is not for everyone, I highly encourage EVERYONE to go through the rush process and experience the brothers firsthand. Fraternities are truly exceptional organizations and have become a vital part of my daily college life. Just like everything else in life, that which is unknown is the most frightening.

If you’re unsure as to whether or not Greek life may be for you, I encourage you to find an active brother or alumnus of any fraternity and ask him any questions you may have. Meet some of his brothers and gain firsthand knowledge of fraternity life. Who knows? You may just end up like me.

Take the plunge, men. It’s an experience that doesn’t compare to anything else.